Join Lion Walk for a week of fun jungle themed activities this summer!

Lion Walk will be hosting a week packed full of fabulous events and activities from Monday 29 July to Saturday 3 August when we launch our King of the Jungle event!

Shoppers can expect a roaringly good time with the daily jungle themed antics and activities. Simba the amazingly lifelike animatronic lion, almost indistinguishable from the real thing, will be there to impress and pose for pictures on Thursday 1 August.

Spell binding zebra and giraffe stilt walkers will tower over you on their travels around the centre, posing for pictures on their way. Fabulous balloon modellers will bend and flex balloons, turning them into popular jungle shapes including all manner of animals, birds and butterflies, ready to give away to passers-by.

Ostrich Explorers with attitude and altitude are guaranteed to make heads turn and cause mischief as they scurry through the centre, creating laughs and entertainment and on Tuesday 30 July, a Safari Ranger and Jungle Jeep will be accompanied by a cuddly zebra character as they mix and mingle with the crowd.

An Animal Encounters zone will be a fun, hands-on event, allowing children to get up close with some animals, handling some really unusual species as if they were in the jungle themselves, and for the more intrepid explorers there will even be snakes and lizards!

If that’s not enough children can also immerse themselves in story telling with Nala’s Stories, told by the Queen explorer of the jungle as well as a creative Hakuna Matata Puppet Craft session. Families can also take part in a letter trail activity, exploring the centre to find the letters which will be located in shop windows. Once they have completed the trail, they will be entered into a competition to win cinema tickets to see the new Lion King film!

Finally a rousing performance from the incredibly talented Colchester based ‘Quire’ will open and close the week’s event on 29 July and 3 August.  With astounding vocals, the choir will perform a selection of uplifting songs and medleys some with an African twist.

Full details of each day’s activities can be found online at https://lionwalkshopping.com/ 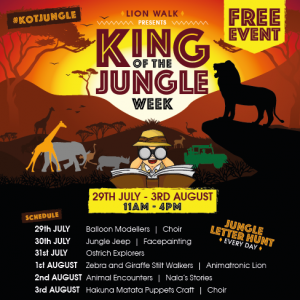